The wonder boy of world tennis was saved to the limit, raised a match ball and sighed with joy and relief after 4 hours and 34 minutes of play. 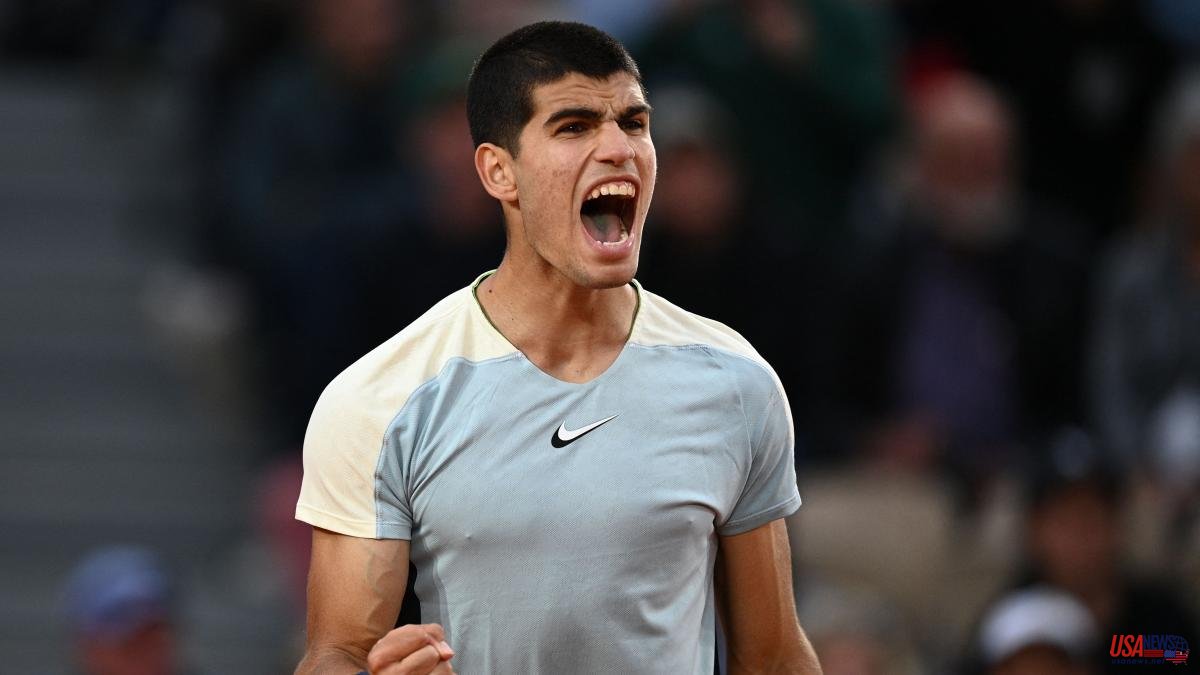 The wonder boy of world tennis was saved to the limit, raised a match ball and sighed with joy and relief after 4 hours and 34 minutes of play. Carlos Alcaraz survived in the second round at Roland Garros against Catalan Albert Ramos in a marathon match and the tournament keeps one of his favorites. The Murcian finished with a direct serve but had to sweat Chinese ink to solve the complex coordinates that the Mataró player gave him and his dreams of shining in the Parisian tournament continue after overcoming a very tough test. A whole milli in a single afternoon. After a brilliant start in which he went over Ramos, he lost his tone, he began to make a sea of ​​mistakes and his veteran opponent (34 years old) began to eat up the field first and then his morale. Alcaraz was gripped by a grown Ramos and ended up on the ropes. The Catalan netted a forehand when he had match point and led the rest 5-4 in the fourth set. The Murcian recovered, forced the fifth set and there he was able to come back from 0-3.

Now Alcaraz will face the winner of the Sebastian Korda-Richard Gasquet. "I am very happy to have lifted this match. Everyone has supported me in the stands. I have felt at home from the beginning".

Alcaraz celebrated the most agonizing match of his long career while Ramos had no choice but to leave heartbroken after having the victory in the palm of his hand. He had just won in Barcelona and Madrid, to beat Nadal, Djokovic or Zverev. The one from Palmar was at a critical moment, at maximum strength because he did not play in Rome, but Ramos, number 44 in the world, became strong, resisted Alcaraz's onslaught, played on his nerves and put up a brutal battle .

Alcaraz wasted up to 23 breaking balls (8 of 31). Or what is the same. 23 decisive points that he rescued with his Ramos serve. Instead, the Catalan got 6 breaks with only 7 chances. A statistic that was about to destroy the illusions of the tennis player from El Palmar.

Who was going to say it at the beginning of the afternoon when the Murcian planted himself on the track with his usual devastating format. Right goes, left comes the favorite was far superior. A force of nature against which Ramos' experience could do nothing but wait for the storm to pass. In a five-set match, ups and downs are common and the Catalan, with twelve appearances at Roland Garros behind him, knew it.

If Alcaraz continued to play like this, he had nothing to do but if his accuracy level dropped by one point and Ramos managed to lengthen and vary the points, he could give himself an opportunity. Play by play he was getting it, he was pulling Ferrero's pupil back and complicated his existence. He took the second set, already very long, he repeated in the third by breaking in the eleventh game and reached the fourth already with Alcaraz desperate, alternating great blows with meridian errors. While Ramos made the ball run more and changed directions and heights. He looked at Alcaraz to his technical team in search of solutions and they asked him to remain calm. But he couldn't find a way to undo an opponent who had his match point at 5-4 and served in the fourth set. He missed his right and in the tiebreaker Alcaraz was more serene and successful.

Everything made one think that the Murcian had done the most difficult but Ramos remained whole, solid and unredeemed. The 0-3 start in the fifth testified to this. However, Alcaraz kept one last arrest, exemplified with a "Nadalian" passing in the race and with almost everything lost to break his rival's serve and then equalize the sleeve.

There, the Ramos deposit seemed to be emptied, which gave up its service again. If Alcaraz had started like lightning, it was ending like thunder. Ramos still equalized again (4-4) but the one from El Palmar would thread his third break in a row with an impressive point. He responded with several desperate lobs from the bottom while Ramos didn't dare to hit hard. In the end he missed the volley and practically delivered a game that Alcaraz then finished. The Murcian won but the Catalan also deserves a tremendous ovation.