Alcaraz: "It was the best match of my career, without a doubt"

On a tremendous night, or rather early morning (it was 2:50), Carlos Alcaraz continued to break records. 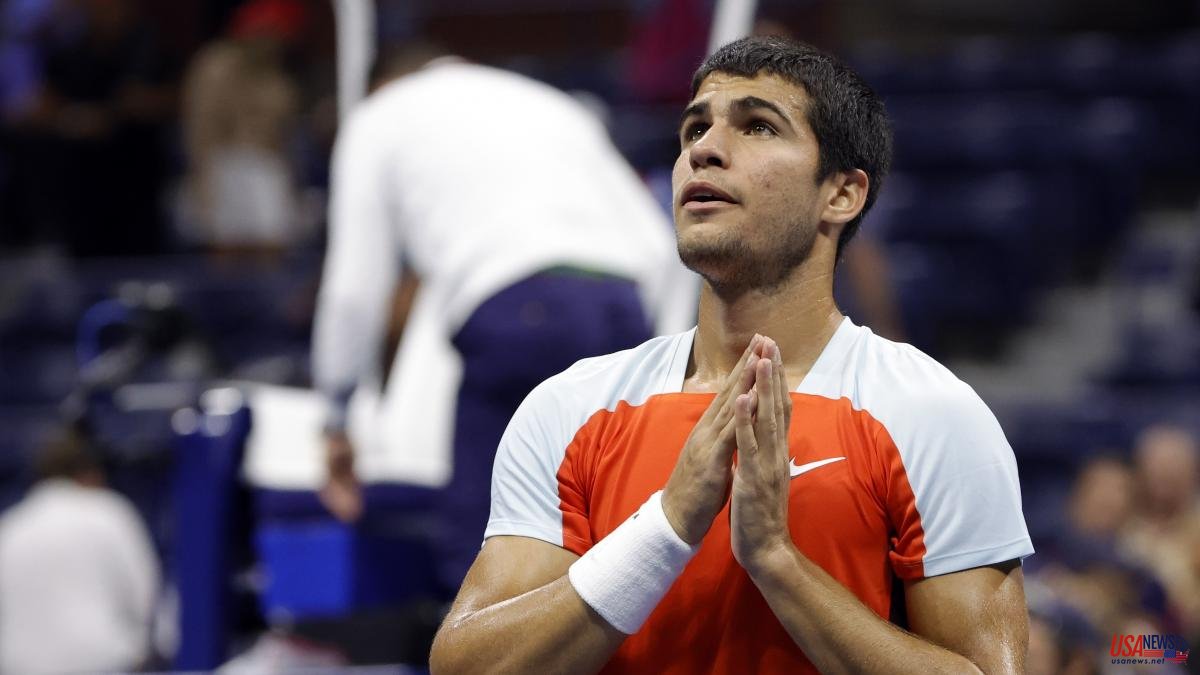 On a tremendous night, or rather early morning (it was 2:50), Carlos Alcaraz continued to break records. Among others, at 19 years old he became the youngest player to reach the semifinals of the US Open (since Pete Sampras did it in 1990) and of a Grand Slam (since Nadal at Roland Garros). He had a hard time battling for five and a quarter hours with an opponent, Jannik Sinner, who was also looking to make his own story. The young man from Murcia could not believe what he had just achieved. “I feel tired but at the same time very happy to have had such a difficult match against Jannik”, he explained. “I think the level we have shown today has been incredible, spectacular. We've both pushed ourselves to the limit."

The match itself also marked milestones in the history of the championship, as the second longest duel, since the semi-final between Michael Chang and Stefan Edberg (5 hours and 26 minutes) in 1992, and the one that concluded later. "This game has been the best I've played in my entire career, without a doubt," assured Carlitos. "After five and a quarter hours, from the first ball to the last we have given immense quality, both Jannik and I, physically, mentally and tennis-wise".

The hardness and long hours of their fight made it clear that Sinner (21 years old) and Alcaraz had the stamina of youth. “There has been no downturn on either side. We have both been there, with some incredible rallies in the fifth set. In all the sets there have been points. We have been close to losing both him and me. We have both had many opportunities. It was a game that both Jannik and I are going to remember for the rest of our careers”.

So intense was the fight that half an hour later the one from Palmar still had not assimilated the relevance of his victory. “At the moment, I think it is one more result. Right now my emotions are running high. Many things have come to my mind. I have not yet stopped to think that I am in my first Grand Slam semifinals and I see that I do not give it the importance it has.

During the third set, John McEnroe, who was broadcasting the match on ESPN and tournament radio, stated: "We are seeing the evolution of tennis." It is the end of an era of legends that gives way to the youth of what we can no longer call new promises. Alcaraz analyzed it in other terms. “Obviously while Rafa, Djokovic and Federer are there, the rivalry they have between them will always come first. But today Jannik and I have shown that we are the present, but we also have a long career ahead of us. We are going to play many times together, we are going to show our best level in big situations, like today, in big tournaments, on big courts. We have already played four times in less than a year and I think there will be many more”.

Jannik Sinner, who had a match point, accepted that this result had been very difficult for him (“I've had other tough losses, but this is the hardest. It's going to hurt for a while”) but he also took the satisfaction of having put out his best tennis. "The first week I didn't play too well, but today I leveled up because he's the kind of player that forces you to raise him up."