Alcaraz: “I would love to play against Nadal at the new Bernabéu”

Spaniard Carlos Alcaraz, a well-known Real Madrid fan, assured that he would be "delighted" to be able to play a tennis match with Rafael Nadal at the new Santiago Bernabéu, while acknowledging that a Nadal-Federer "would throw more. 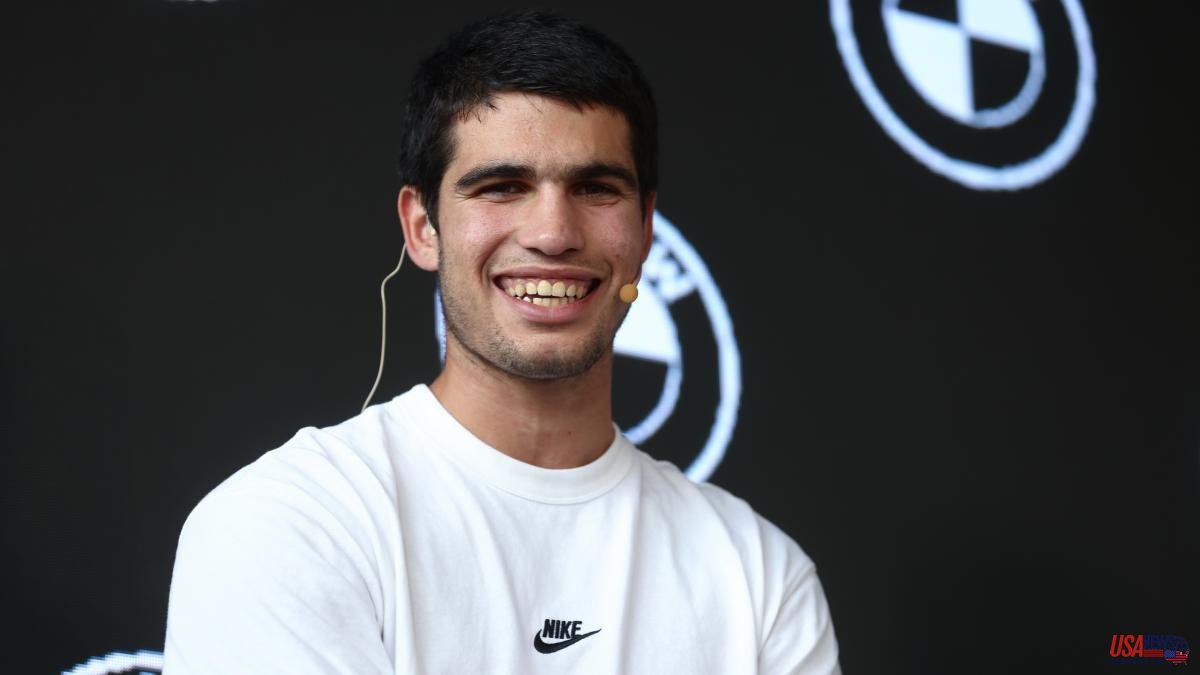 Spaniard Carlos Alcaraz, a well-known Real Madrid fan, assured that he would be "delighted" to be able to play a tennis match with Rafael Nadal at the new Santiago Bernabéu, while acknowledging that a Nadal-Federer "would throw more."

“I would love to play at the Bernabéu, and even more so with Rafa. But now a Rafa-Federer throws more; It would be nice to see that match. But I hope they tell me to play it, I would be delighted”, said the recent winner of the United States Open and number 1 in tennis.

The tennis player spoke of the best advice he has been given to be able to handle the pressure and everything that surrounds him on a day-to-day basis when he is at the top of tennis. “It is a path that they have been telling me a lot. Always be humble, be with your people, don't let the results and the moment go to your head; know where you come from. Both my team and the people around me have told me; let it be the same,” he replied.

“Now you shy away from doing certain things that you used to do completely normally, but I get along with everything. But not all. If I want to go for a walk I go for a walk and if they ask me for photos I like it, knowing that people support me gives me peace of mind, it makes me see that I do not play alone, ”she expanded.

“It has not been a pressure that I have put on myself to think that I am achieving the things of the 'Big 3' -Nadal, Federer and Djokovic-. I just enjoy playing tennis; And that's where the results come from. Many times I bring smiles in tense moments or when things go wrong, and it is simply because I enjoy being on the track. Why am I going to compare myself to them? It doesn't make sense, they've been around for 20 years and I've only just started,” he said of the comparisons to some of the greatest tennis players in history.

About the Swiss, who recently announced his retirement, Alcaraz added: “Roger is pure talent, class… for me it is elegance. He has lasted this long because of how he plays and how he moves. He seems like he doesn't push himself. He has played 1,800 games and has not retired from any of them, at 19 years old I already retired from one last year," he snapped.

"Hopefully I can last as long as he has lasted and win what he has won, or a quarter of it. I've always wanted to face him, it won't be possible... but better that way than having left with a defeat", he joked.

After winning the US Open and captaining Spain to the Davis Cup quarterfinals, Alcaraz is already thinking about returning home to El Palmar (Murcia): “I really want to get home and meet my family again in House. Eat with them, spend time with them... enjoy with them. I want to see the people of my town who have seen me grow and who support me so much, ”he commented.

In addition, Alcaraz referred to the European Basketball Championship achieved by the Spanish team and hopes that more young athletes can continue to meet their goals. “I am proud that they have been European champions. It's a pass. In Spain many athletes come out, 'cracks' are coming out and they will continue to do so. Hopefully we can see many young athletes achieve their dreams”, he commented.