The Spanish Carlos Alcaraz assured that "not at all" he looks like a favorite this year at Wimbledon because there are much more accustomed and better tennis players on the grass than him and pointed out that he arrived in London with doubts due to the discomfort he suffered in his elbow. 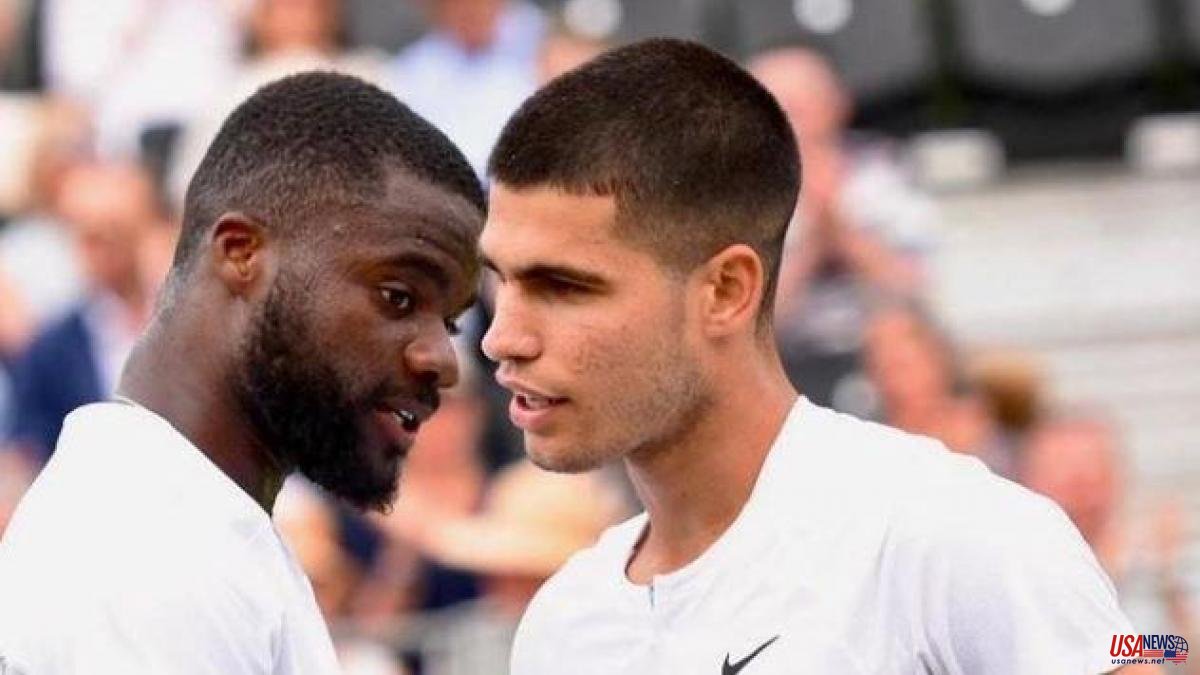 The Spanish Carlos Alcaraz assured that "not at all" he looks like a favorite this year at Wimbledon because there are much more accustomed and better tennis players on the grass than him and pointed out that he arrived in London with doubts due to the discomfort he suffered in his elbow.

The Murcian tennis player lost this Thursday in the Hurlingham exhibition against the American Frances Tiafoe (6-4 and 6-2), in his first game on grass of the season. Alcaraz was scheduled to play at Queen's last week, but he dropped out of the tournament due to some discomfort in his elbow that he still has a bandage on, but from which he is doing well.

"A week ago I couldn't train at all," Alcaraz told Spanish media in Hurlingham. "I have come here with uncertainty as to whether I was going to be able to play normally. These days that I have been able to train here I have felt quite well, zero pain in the elbow and today without any pain in the match with Tiafoe".

The Murcian starts as the fifth seed at Wimbledon and after a season full of successes, with the conquest of the Masters 1,000 in Miami, the Masters 1,000 in Madrid and the ATP 500 in Barcelona and Rio de Janeiro. However, he does not look like one of the favorites for the third Grand Slam of the season. "The truth is that I don't mind being in the spotlight, I don't take it as pressure, but I've seen that they take me as one of the favorites for Wimbledon, but I don't see it that way at all. There are many players who play better on grass than me. Djokovic, Rafa, Berrettini, they are playing incredible on grass. We are going to try to gain experience on this surface", he reflected.

On the keys to the good adaptation of the clay to the grass, Alcaraz stressed that he has to concentrate on "moving well". "Knowing how to move well on grass is very important. I think it's the key to being able to get good results here. We're trying to improve there, in mobility and in small details that are more important on this surface. Being more aggressive than necessary, trying take advantage of the fact that I go up to the volley well, those things", he clarified.

The one from El Palmar will train this Friday morning at Wimbledon, already knowing the opponent of his debut, which will be drawn at 10 in the morning, and will play his second exhibition match in Hurlingham starting at 2:30 p.m. local time against the Norwegian Casper Ruud, whom he already beat this year in the Miami final.