The 5th stage of the Dakar rally, in the surroundings of Ha'il, with 373 timed km, offered a spectacular four-way battle between the fantastic four, who ended up winning Nasser Al Attiyah (Toyota) by 1m57s over Carlos Sainz (Audi ). 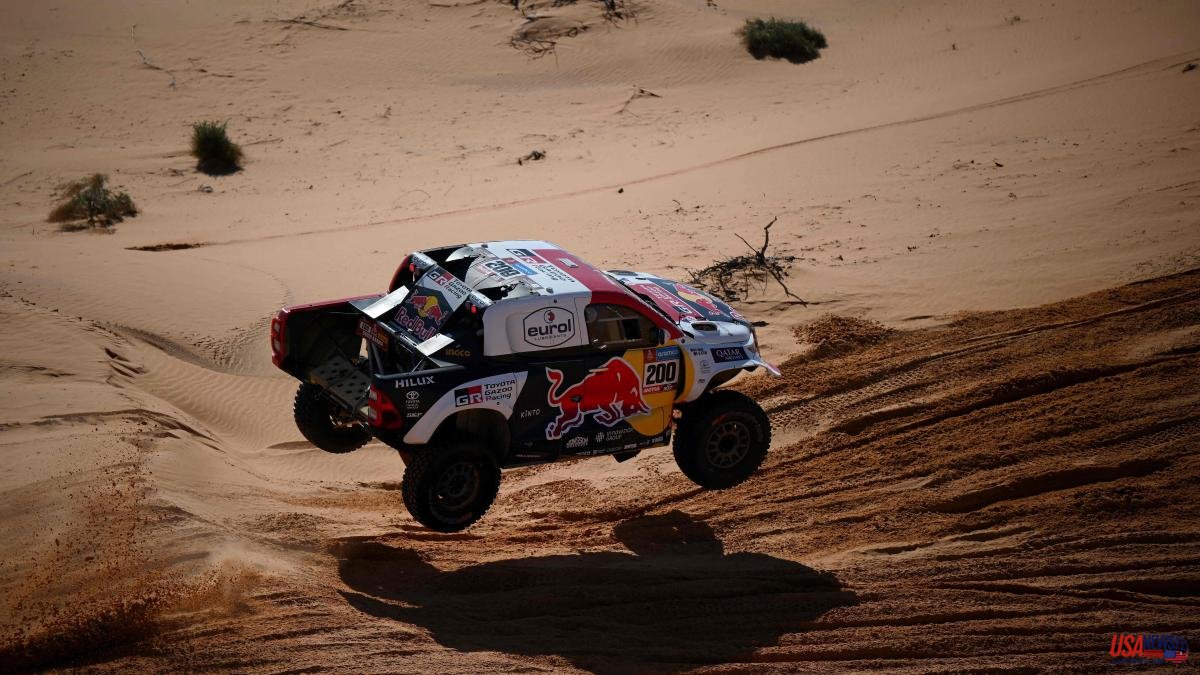 The 5th stage of the Dakar rally, in the surroundings of Ha'il, with 373 timed km, offered a spectacular four-way battle between the fantastic four, who ended up winning Nasser Al Attiyah (Toyota) by 1m57s over Carlos Sainz (Audi ). So the Qatari extends his advantage in the lead, in the midst of a bitter controversy over the extension of power to hybrid Audis.

Al Attiyah scored his second stage victory in this Dakar 2023 after an intense fight between Al Attiyah, Peterhansel, Loeb and Sainz in which sparks flew, with time differences closer to a stage of World Rally WRC rallies than the Dakar.

After a start to the day with the South African Lategan leading the stage (up to km 37), Peterhansel soon began to set the tone at kilometer 90, with 20s ahead of Al Attiyah, Sainz was 15s away from the Qatari, and Loeb 6s away. from Madrid. The four in a handkerchief.

That was the tonic of the stage of terrain more conducive to speed, sand and low dunes, in which there were four changes of leader and position jumps among the fantastic four. Loeb, the one with the least to lose of the quartet, squeezed the Hunter out of him to take the lead at km 182, by 3s over Al Attiyah, while Sainz remained fourth for most of the route.

The final rollover occurred with 100 km to go, before the penultimate checkpoint at km 326: Loeb suffered an accident, overturned his Hunter and lost almost 20 minutes to recover the route.

Nasser Al Attiyah, who had taken the lead before km 210, prevailed at the finish line with 1m57s over Sainz, who in the last stage overtook Peterhansel, finally third at 3m44s.

With the second stage victory, Al Attiyah consolidates his overall lead with 22m34s over Peterhansel, now second, and Sainz, who rises from 4th to 3rd, but 34m5s behind the Qatari.

For his part, Sébastien Loeb, 11th overall, buries practically all his options by distancing himself 1h and 53 minutes from the lead.

The 5th stage was marked in the prolegomena by the controversy that arose as a result of the decision of the FIA ​​to allow the three hybrid Audis to increase their power by 10.7 CV.

This is a measure that includes the sports regulations for off-road rallies according to which the equivalence of technology can be readjusted: when competing with thermal cars (T1, Toyotas, Minis and Hunters BRX) against hybrid cars (Audi), the difference in weight (100 kg plus the Audi) is compensated with power. The stewards detected an imbalance with the data from the first three stages and opted to give the Audis 8 kW more (the equivalent of 10.7 hp).

The decision of the FIA ​​stewards caused the anger of Nasser Al Attiyah, who on his Instagram account snapped at the Federation: ""What a surprise to give our main rival 11 more CV!!! Thank you for killing the race early, "wrote the Qatari. Toyota asked the driver and his co-driver Baumel to delete the message to avoid problems.

However, the FIA ​​reported the comment to the sporting stewards so that they could decide on a possible sporting sanction. It is in the hands of the FIA ​​bodies to alter the results on the road.