The bay of Palma offered exceptional conditions this Monday, August 1, on the first day of the regatta week of the 40th Copa del Rey Mapfre, with 14 knots of embat (the bay's characteristic south-westerly wind). 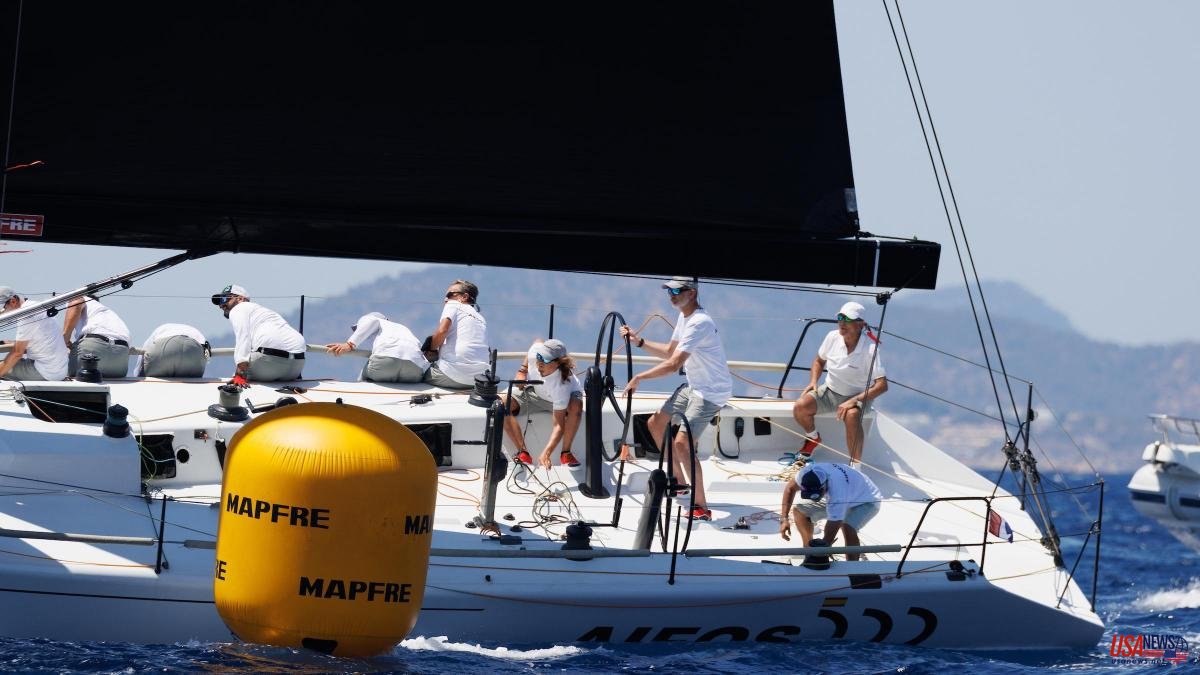 The bay of Palma offered exceptional conditions this Monday, August 1, on the first day of the regatta week of the 40th Copa del Rey Mapfre, with 14 knots of embat (the bay's characteristic south-westerly wind). Seven of the nine classes opened their lockers in search of the most prestigious trophy in Spanish sailing, organized since 1982 by the Real Club Náutico de Palma. J70 and the women's class Women's Cup, which is contested on J80 sailboats, begin their tests on Tuesday.

In the ORC1 class, the Navy's Aifos 500, skippered by the King, opened the competition with a discreet eighth place, but improved spectacularly in the following test, with a second place that currently places it second in the provisional classification. The class brings together 18 sailboats and is once again the one that generates the most expectation in the three regatta fields established in the bay of Palma.

First in this class after the opening day is the HM Hospitales of Alexandre Laplaza and Óscar Chaves, with Fernando León, Kiko Sánchez Luna and Carlos Rodríguez in the crew.

In principle, the provisional classification gave the German Red Bandit as the leader, a project by Carl-Peter Forster, an experienced sailor from the Bayerischer Yacht Club, whose objective is to introduce the young sailors of this club to highly competitive boats, and which They had made their debut in Palma with a second and a first place on this first day of competition.

But a protest that prospered hours later, due to an incorrect maneuver in a buoy passage in the first test, put an end to his day. The sanction implies 19 points (the number of boats participating in the regatta plus one) and the Red Bandit went to the tenth position after having celebrated the first.

Both the Red Bandit and the Aifos 500 are TP52 sailboats and their main rivals in this 40th edition of the Copa del Rey Mapfre are three DK46s, a particularly competitive racing cruiser model. The now leader, HM Hospitales, is one of these DK46. Owned by the shipowner Óscar Chaves, from the El Balís Yacht Club, he is the winner of four Copas del Rey, one under the Maserati name, two as Estrella Damm and one, last year, as Hydra.

It now bears the name of HM Hospitales and has been assembled by Alexandre Laplaza and has Carlos Rodríguez as its patron. They won the first regatta of the day and were third in the next, so they have four points and are leaders after the Red Bandit penalty.

The Estrella Damm team, skippered by Luis Martínez Doreste, is fifth with another DK46, after adding two fifth places, and the third DK46, with skipper José María Torcida at the helm, is sixth, with thirteen points.

The 40th Copa del Rey Mapfre has only just begun but the week of regatta promises excitement at ORC1 with this battle between the two TP52s and the three DK46s. In the middle, in fourth position, is the French sailboat Arobas 2, owned by Logel Gerard, with ten points.

In ORC2, the fight for the trophy has begun between three Swan 42 sailboats. The Soho Caixabank Theater of Javier Banderas, the brother of actor Antonio Banderas, who has Daniel Cuevas as skipper and Luis Doreste as tactician, one of the most successful Spanish sailors; the Katarina II, owned by Estonian Aivar Tuulberg, and the Rivareno Gelato-Elena Nova, owned by Christian Plump and Javier Sanz, the president of the Royal Spanish Sailing Federation.

ORC3 started with a clear dominance of the Italian Scugnizza, led by Enzo de Blasio, who won both races of the day. And in ORC4 the first leader is Otto Pohlmann's Meerblick Fun, closely marked by the Mestral Fast of Majorcan Jaime Morell, from the RCNP.

In the Swan 50 one-design class, in which all sailboats are equal, there are fourteen units in the running and the first leader is the Swiss Onegroup, owned by Stefan Heidenreich, who made two fourth places. August Schram's Austrian Stella Maris won the first race but placed thirteenth in the second. In turn, the Italian Giuliana, of Alberto Franchi, had been fourteenth in the first test but won the second. It is the fundamental characteristic of the one-design classes, in which the total equality of the boats never allows us to speak of favorites.

Barcelona's Pablo Garriga's Tenaz, the only Spanish representative in the Swan 50 class, is fourth after having done a third and an eighth. The German Hendrik Brandis, winner of five King's Cups with different boats, has also competed in this class since its creation, and after this first day he is seventh, with a total of 14 points.

The Club Swan 42 class brings together nine sailboats because the models most prepared for competition are in ORC2 and here the dominance of Koyre-Spirit of Nerina stands out, with skipper Mirko Bargolini, who won both races of the day.

And finally at Club Swan 36, for the moment Nikolai P. Burkart's German Goddes is in charge, followed by Lorenzo Mondo's Italian Farstar. There is no Spanish representative here.