A young man, a grandfather, a sheep and a talking television

The minimalist drawing has always been good for humorous comics. 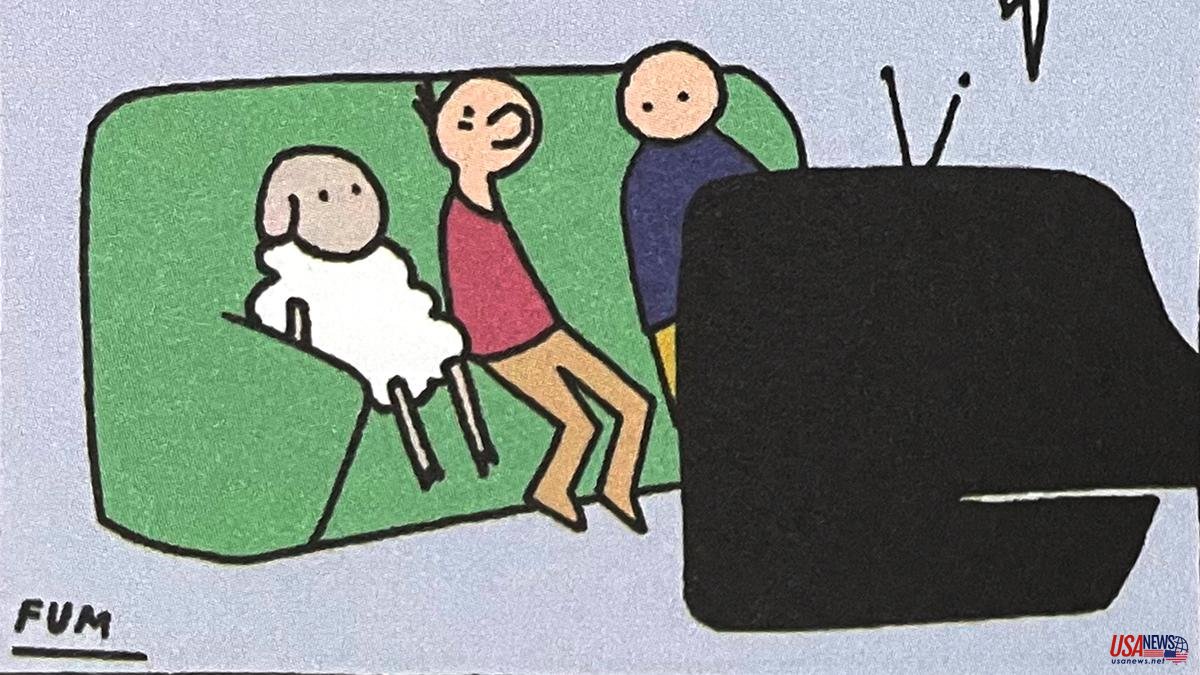 The minimalist drawing has always been good for humorous comics. In these cases, using few graphic elements has been, not a lack but an opportunity, because it allowed readers to focus on what is essential: on the humor, on the gag, on an interpretation that often works on several levels.

The comic strips, which thanks to their important presence in the press are an essential part of the history of comics, exemplify the importance of minimalism. Schulz's Peanuts series with Charlie Brown and his famous Snoopy series are good proof. But there are many more examples, from Otto Soglow's Little King to Scott Adams' ineffable Dilbert.

Minimalism is the first thing that catches your eye when leafing through the strips and half pages of the album Asunción el television (Nuggets), written and drawn by Fum, the pseudonym of Joan Bufill. A graphic line of constant thickness and some characters that are defined with the minimum strokes to represent what is strictly necessary (if the arms are not important in a scene, they do not appear). Brief dialogues and a flat color in the vignettes.

The brief but juicy prologue by Mauro Entrialgo points out other referents of Fum that help to understand his graphic style and his humor away from conventions: a mix between classicism and modernity, some referents that go from the Bruguera school —Manuel Vázquez, that great minimalist who he was always modern—but also Segar's Popeye or Calpurnio's threadbare cowboy, Cutlass. Fum's own dedication to authors such as Guillem Cifré, Paco Alcázar, Pere Joan or Albert Monteys help complete this list of references always willing to experiment with their vignettes without forgetting humour.

Consistent with his graphic style, it seems that Fum has set himself the challenge of transferring that minimalism to the very plot of these adventures. Only four characters to force humor to arise solely from the possibilities they offer and the chemistry that may arise between them. The starting point is the following: a young man rents an apartment where there is a television that speaks; In order not to feel alone, he buys a sheep as a pet. And after a few days the boy's grandfather appears, who ends up staying, forming the quartet. Four characters in search of humor.

From that unlikely crew, Fum draws all the comic situations from this 150-page album. Sometimes absurd and surreal humor, sometimes with a clear accent of social criticism. In any case, the creative freedom and the unequivocally absurd starting point of the series allow everything to be possible on this floor: from the visit of God to the presence of Satan or a ghost, from the birth of a small jungle to a flood.

Beyond the humor of each delivery, the strips or half pages of Asunción el television end up forming a story with a certain continuity and the protagonists thus become endearing beings for the reader. This emotional bond with the characters is another of the strips' characteristics, and Fum knows how to exploit it well. Especially outstanding is the role of the grandfather and the sheep, who have become the true stars of some of these jokes. On other occasions, it is the very language of the comic that triggers the humor in these strips in a fun example of metalanguage that also tends to suit humorous comics.