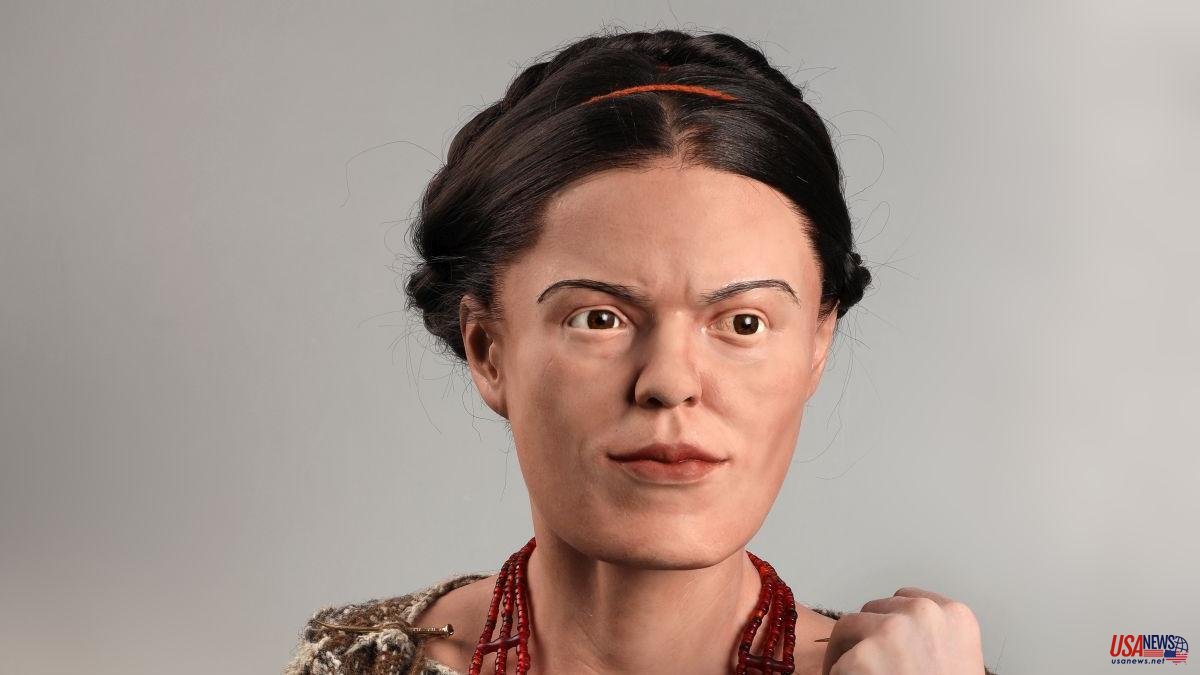 Light skin, brown hair, brown eyes, and a peculiar chin. She was like that 4,000 years ago a woman who lived in what is now the Czech Republic. It is not an illusion or an invention. Experts from the Moravian Museum and the Czech Academy of Sciences have used the data obtained from her DNA and the details of her skeleton to make the most reliable reconstruction possible.

The protagonist of this story was around 35 years old when she died. She was buried with luxurious grave goods: her body was adorned with bronze and gold jewelry and a beautiful amber necklace. She was buried in Mikulovice, near Pardubice, a short distance from the Polish border.

The lady was part of the upper class in the Early Bronze Age. Her tomb, for example, is the richest ever found for a woman from the so-called Únětice culture, which spread between the Rhine and Dniper rivers, from the Baltic Sea to the Lower Danube.

The time around 2000 B.C. they are associated with the beginnings of bronze metallurgy in Europe, with the development of long-distance trade and supra-regional contacts of all kinds. At this crucial moment, the territory of present-day Bohemia, together with the regions of southern England and southeastern Spain, was one of the most developed on the European continent.

A total of five bronze bracelets, three bronze needles, two gold earrings and, above all, a beautiful three-row amber necklace made up of more than 400 beads and at least five of the so-called sorters have been found in his grave. .

"This is a completely unique piece of jewelry, which is unparalleled among finds from this period," says Michal Ernée of the Institute of Archeology at the Czech Academy of Sciences. "Radiocarbon dating carried out in a laboratory in Mannheim places the tomb between 1880 and 1750 BC," he adds.

“The analysis not only confirmed the data on the sex of the buried woman, but also allowed us to obtain more detailed information on the color of her skin, hair and eyes. This took the reconstruction to a much higher level of quality and allowed us to get a much more realistic and fact-based idea of ​​what she looked like," she adds.

The reconstruction, Vaníčková points out, significantly enriches the possibilities of presenting the finds to all kinds of audiences. "We are seeing a growing demand for 'live', three-dimensional and as realistic as possible results. This allows the current generation, growing up in a 'digital environment', to perceive archaeological research in a comprehensive and understandable way," she says. .

Between 2007 and 2009, archaeologists from the Academy of Sciences and the East Bohemian Museum examined various grave groups from the Early Bronze Age, ie from 2200 to 1700 BC. "It soon became clear that the local cemetery was a real gold mine, with a large amount of grave goods from the local deceased that provided a lot of information about that period," says Michal Ernée.

One of the significant differences between the territory of present-day Bohemia and all the neighboring areas is the massive presence of amber in the graves. “The amber (from the Baltic) is clearly of foreign origin in our territory and is therefore important evidence of supra-regional contacts in the Early Bronze Age”, adds the archaeologist.

Mikulovice Cemetery stands out for its richness. With almost 900 amber objects identified in the 27 local graves, the site has become the locality with the most amber in the entire Únětice world and one of the richest in Europe at the time. "Necklaces with this fossilized resin were found here in more than 40% of all women's graves, which is a beastly number," says Ernée.

Cemeteries with skeletons are a "gift from heaven" for archaeologists. Unlike other types of sites, such as settlements or deposits of bronze objects, in the cemeteries not only human remains are found, but also grave goods and other important objects.