A hyper-realistic portrait of an almost octogenarian Gala that Salvador Dalí painted around 1976 is one of the central pieces of the temporary exhibition at the Gala-Dalí Castle in Púbol, the castle that Dalí gave to his beloved and that she accepted under the sole condition that he could only visit her by written invitation. 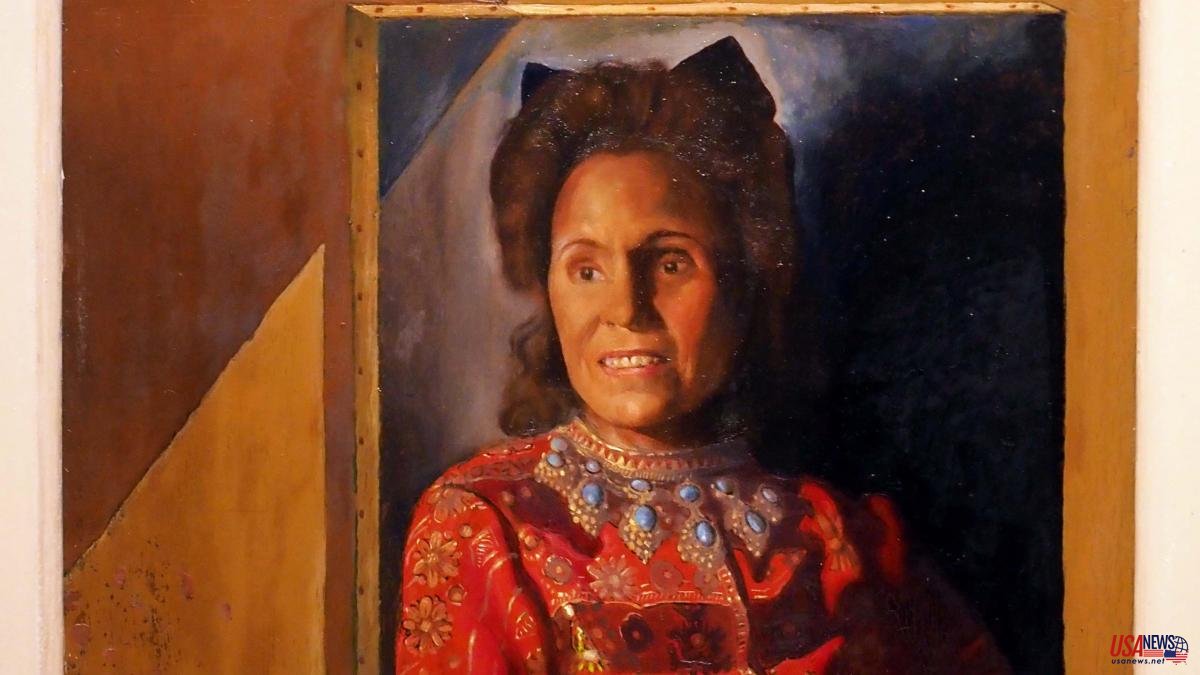 A hyper-realistic portrait of an almost octogenarian Gala that Salvador Dalí painted around 1976 is one of the central pieces of the temporary exhibition at the Gala-Dalí Castle in Púbol, the castle that Dalí gave to his beloved and that she accepted under the sole condition that he could only visit her by written invitation. It is an oil on copper in which an aged Gala appears, reflecting the inexorable passage of time.

"It's a shocking image with a Gala more vulnerable than ever, of great verismo, which contrasts with what Dalí used to idealize in his works," says Bea Crespo, a member of the Center d'Estudis Dalinians and deputy curator of the exhibition Púbol de Gala: Illusion and reality, which can be visited until January 6.

The painting is inspired by a photo of Gala that was included in a larger report on the future castle of Púbol made by Marc Lacroix in 1971, commissioned by the artist, for the French magazine Vogue. In the image, Dalí's muse wears a jewelery necklace with turquoise stones and a prêt-à-porter red print dress from Elizabeth Arden New York – also present in the exhibition – which she wore at important events such as the inauguration of the Teatre-Museu Dalí in Figueres, in 1974, or when Dalí was appointed associate member of the Academy of Fine Arts of the Institute of France in 1979.

The portrait is inspired by the trompe-l'oeil technique, an optical game, present in Dalí's work and also in other elements of the castle of Púbol that help to generate confusion in the visitor, such as doors that lead nowhere or in the radiator covers. In this case, Gala is represented on a canvas that is not real, but painted on a wall that could allude to the Púbol castle. “The detachments from the wall and the shadow of the painting that advances over Gala give the portrait a dramatic air that shows the irremediable passage of time”, explains Bea Crespo.

The painting was presented for the first time in public at the Galerie André François Petit in Paris in 1977, and the following year, at the Guggenheim Museum in New York, in a sumptuous setting in the style of Louis XV, which the curators also wanted to reproduce. for this exhibition. The portrait, owned by the Dalí Foundation, has since been exhibited only six other times, most recently in an exhibition at the Fabergé Museum in St. Petersburg earlier this year. "Such a real vision of Gala is not easy to see, both were terrified of old age", highlights the curator and director of the Dalí Museums, Montse Aguer.

In contrast to that hyper-real Gala, the idealized Gala appears, the other large area of ​​the exhibition, which includes a dozen drawings and sketches to decorate the interiors and the garden of Púbol castle. A work that was executed by the builder Emilio Puignau without the mediation of any architect. They are drawings that refer to a magical world in which unicorns, swallows, fleurs-de-lis appear, the symbol of royalty and a whole magical universe that is very present in Púbol, the ruined castle that the couple bought in 1970 and where Gala is buried. .

Two of these sketches for the garden, made around 1970 on a piece of paper for the Hotel St Regis-Sheraton in New York, are unpublished. In one of them you can see an idealized Gala in the roundabout. "For Dalí drawing was a compulsive gesture and he did it on any support, from the paper of a hotel to the back of a photograph," explains Aguer. The others are little known