There is less and less left to kick off the World Cup in Qatar which, despite being surrounded by controversy due to the restrictions imposed and the alleged corruption that revolves around it, continues to be the most anticipated event of the year for fans and enthusiasts of soccer. 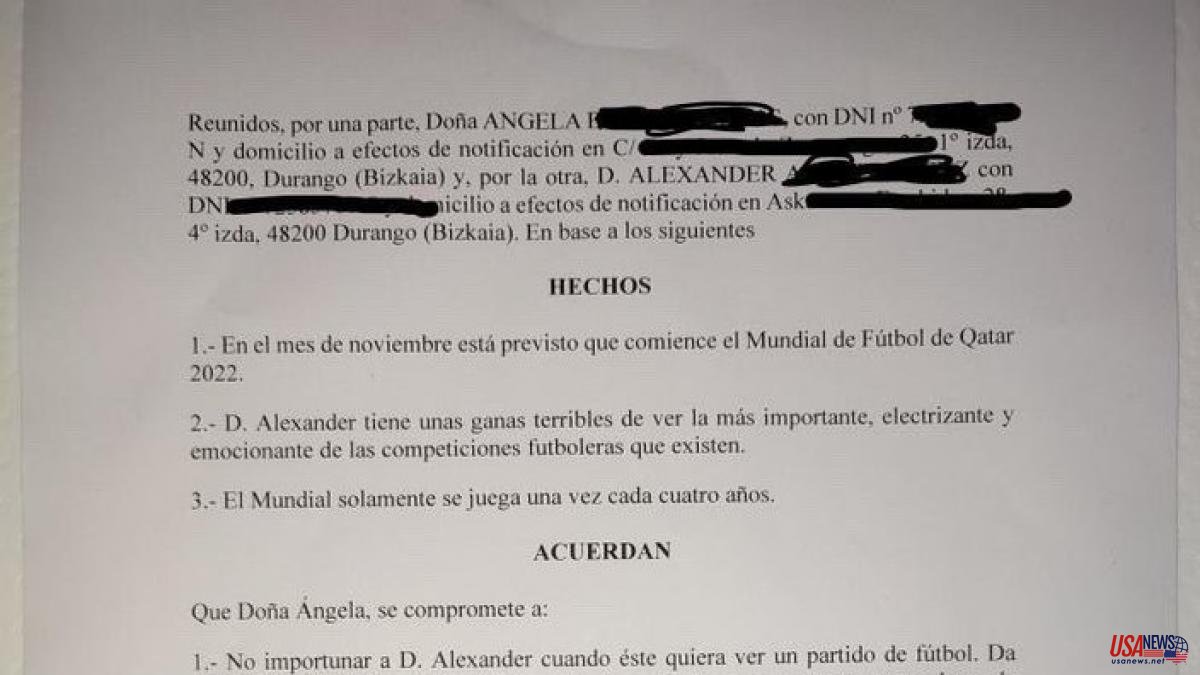 There is less and less left to kick off the World Cup in Qatar which, despite being surrounded by controversy due to the restrictions imposed and the alleged corruption that revolves around it, continues to be the most anticipated event of the year for fans and enthusiasts of soccer.

So much so that some users have already begun to share on social networks how they are experiencing the World Cup countdown in the most peculiar ways: from buying a beer from the 32 participating countries, to reaching a legal agreement with their partner to establish some rules.

The deal. This has been demonstrated by the Twitter user @RajadoresFutbol, ​​sharing the peculiar agreement reached by Don Alexander and Doña Ángela: “When you have a partner, swallow certain aberrations from matches that take place in the World Cup group stage, because it gets complicated. See Qatar vs. Ecuador that is coming on Sunday. Given this, a hacker sends me the legal agreement he has reached with his wife. Well played ”, he points out in a tweet next to an image of the document.

As can be seen in the shared “legal” agreement, the rules are as follows: “Doña Ángela should not bother Don Alexander when he wants to watch a soccer game. It doesn't matter if it's a Qatar-Senegal match or any other game suspected of being boring or not decisive”.

But not only that, he also ensures that "if Cristiano Ronaldo scores a goal, it is mandatory to shout 'siiiuuuuuu' (in reference to the iconic celebration of the Portuguese)", while adding "In case the AFA (Argentine Football Association) wins the Soccer World Cup, Doña Ángela will allow Don Alexander to frame and hang a photo of Lionel Andrés Messi lifting the World Cup from a column in the living room.

Not to mention that "the days that the World Cup lasts, whenever Don Alexander so wishes, soccer will have absolute and indisputable priority over any other programming and Doña Ángela must put up with each of Don Alexander's comments without taking into account account the duration, veracity and importance of the same”.

Top comments. An agreement that has fascinated soccer fans who couldn't help but feel envy for Don Alexander: “My wife doesn't sign that, not even Jumilla. Well played and well achieved Mr.Alexander”, “Alexander doesn't give up anything. The considerations that she receives in exchange are not reflected, unless it is understood that she is going to pay for the remains”, “In exchange for…”, “Adding a point in which it is clear that after the World Cup all the Christmas movies”, “I see you at Ikea for the remains. With her mother-in-law”, “The wife's amendments are missing. I'm sure she hasn't come out so well off ”, have been some of the most popular reactions.

Although the contract supposedly has the signature of the two involved, the truth is that this type of document has no place in any of the types of contract that are established by law, so it has no legal significance as it does not comply with the essential elements of a contract. In other words, it would not be covered by any of the contractual modalities included in the Civil Code.