The academy player Gabri Veiga made his debut as a starter in the Santander League with the winning goal for RC Celta against Real Betis (1-0), a match conditioned for the Andalusian team due to the early expulsion of central defender Luiz Felipe, despite the fact that during In the second half, the Betis team came close to equalizing with great chances that the Marchesín goalkeeper rejected. 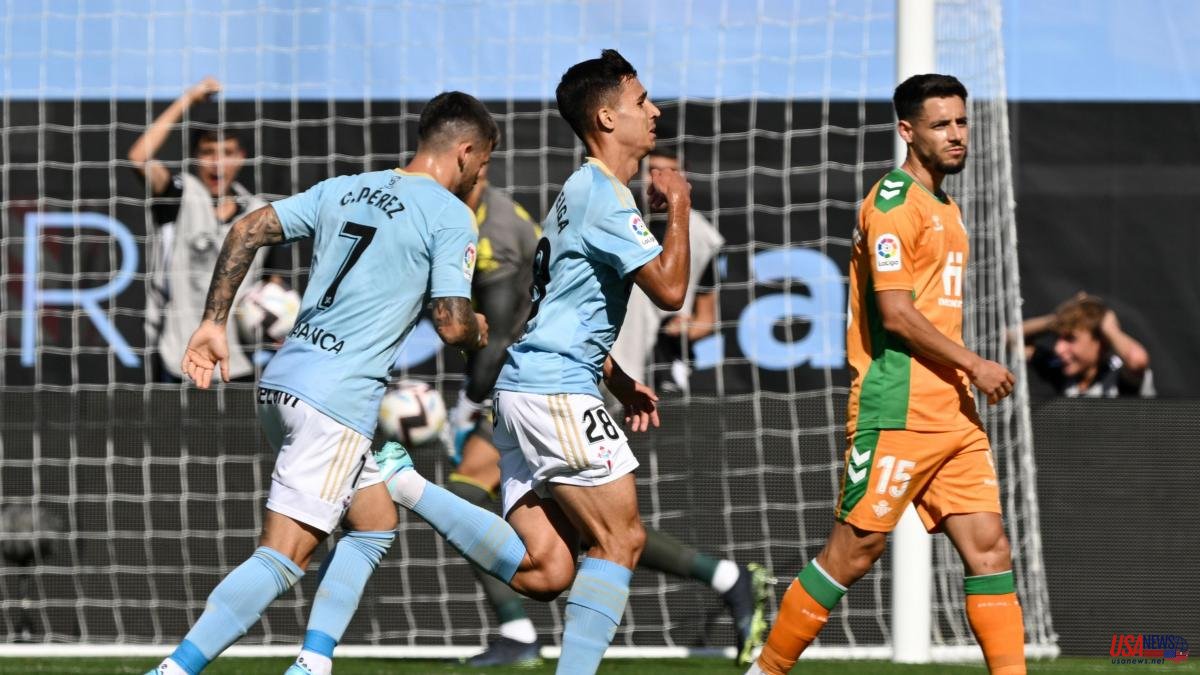 The academy player Gabri Veiga made his debut as a starter in the Santander League with the winning goal for RC Celta against Real Betis (1-0), a match conditioned for the Andalusian team due to the early expulsion of central defender Luiz Felipe, despite the fact that during In the second half, the Betis team came close to equalizing with great chances that the Marchesín goalkeeper rejected.

Celta, with the novelty of Gabri Veiga's debut as a starter and the unexpected substitution of Iago Aspas due to indisposition, opened the game with enormous authority. It was a missile. Intense in high pressure, with possession of the ball, he surrounded Betis. And he took advantage of all the defensive imbalances of the Andalusian team.

Carles Pérez warned in the first minute with a dangerous shot that Luiz Felipe cleared, after an initial error by Edgar. Just a few minutes later, after Beltrán recovered from a Betis throw-in, Gabri Veiga scored with a powerful shot from twenty-five metres. It was a display of celestial power: pressure, recovery, a good dribble led by Gabri Veiga and an unstoppable whiplash.

Betis, forced to defend without having the ball, was a weak team, surpassed by Celta, who dominated. He was never in control. Without lucidity in attack, without the connection of Canales with his teammates, he only appeared on the Galician goal once, an occasion facilitated by a poor clearance by Beltrán. Borja Iglesias stood up to Marchesín, who was quick to cover the shot.

The game had no respite: five minutes after Marchesín had prevented the draw, Larsen caused the expulsion of Luiz Felipe. On a long pass, the Norwegian striker made a fabulous control, perfectly aimed towards the box. Larsen was going alone towards the goal and Luiz Felipe grabbed him. The referee initially punished that grab with a yellow card. Reviewed the play in the VAR expelled the central. They were only nineteen minutes into the game.

Betis resisted the sky-blue harassment, reflected until the break with a good free kick by Óscar Rodríguez and a one-on-one by Carles Pérez against Rui Silva that the goalkeeper saved. Manuel Pellegrini refreshed the Andalusian team's attack for the second half with William José and Fekir. His team got better. He had more ball. He forced Celta to go back many meters. He took over the match, despite having one less player and taking the risk of leaving his defensive zone unprotected. He had the option of equalizing in a good action, spun down the right wing, which ended with a hard shot by Rodri, a shot centered on goal that Marchesín took.

The Argentine goalkeeper was once again decisive midway through the second half, repelling a great header from Willian José. It was not the last big stop for Marchesín. Near the end, he deflected a dangerous shot from Ruibal from inside the area. Betis pressed. And he came close to equalizing again with a header from Pezzella, finishing off a lateral free kick, and a high shot from Joaquín inside the small area.

Celta suffered a lot in the final phase, despite having space to counterattack and disturb Rui Silva, something that only Óscar Rodríguez did with a clear opportunity that the goalkeeper took, ending the suspense that Balaídos experienced during the second half. The light blue victory was dedicated to his coach, Chacho Coudet, with permission from the club to travel to Argentina for a family matter.

Incidents: Match corresponding to the seventh day of LaLiga Santander played at the Abanca Balaídos stadium before 14,344 spectators. Iago Aspas took the field with his children to offer the fans his fourth Zarra Trophy.