The Perseverance rover made oxygen on Mars 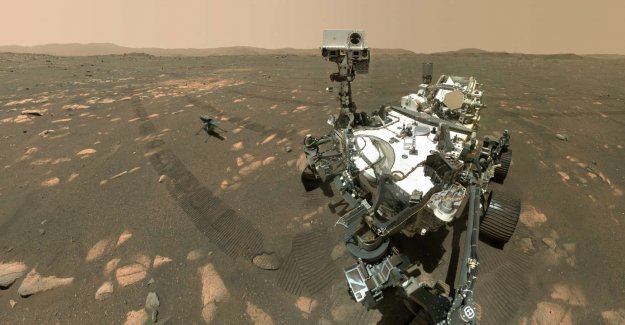 NASA's Perseverance rover, and its Ingenuity drone, on April 6th on Mars. AP < p class= "article _ _ paragraph" > Perseverance's new feat: NASA's rover has transformed carbon dioxide from the atmosphere of Mars into oxygen, a first on another planet, the US space agency announced on Wednesday. "This is a crucial first attempt to convert carbon dioxide into oxygen on Mars," said Jim Reuter, an associate administrator at NASA. < / p>

The demonstration took place on April 20, and NASA hopes that future versions of the experimental tool used can set the stage for human exploration. Not only could the process produce oxygen for future astronauts to breathe, it could also help avoid carrying large amounts of oxygen from Earth that are essential to propel the rocket for the return journey. < / p> Oxygen for ten minutes < p class = "article _ _ paragraph" > The "Mars Oxygen In-Situ Resource Utilization Experiment" (Moxie) is a golden box the size of a car battery, located on the front right of the rover. It uses electricity and chemistry to split CO2 molecules, thus producing oxygen, on one side, and carbon monoxide, on the other. For his first experiment, Moxie produced five grams of oxygen, enough to breathe for ten minutes for an astronaut with normal activity. < / p> Read also Ingenuity, NASA's small helicopter, succeeds in its first flight to Mars

The engineers in charge of Moxie will now conduct more tests and try to increase this result. The tool has been developed to be able to generate up to 10 grams of oxygen per hour. Designed at the prestigious Massachusetts Institute of Technology (MIT), Moxie was manufactured with heat-resistant materials to tolerate the 800 °C burning temperatures required for its operation. < / p> An efficient and practical method

A thin golden layer prevents it from radiating this heat and damaging the rover. According to MIT engineer Michael Hecht, a one-ton Moxie-this one weighs 17 kg-could produce the approximately 25 tons of oxygen needed for a rocket to take off from Mars. < / p> Article reserved for our subscribers Read also Thomas Pesquet ready for a new take-off to space : "We know when it will hurt, when it will be long, when it will be difficult"

Producing oxygen from the atmosphere of Mars, composed of 96% carbon dioxide, could prove easier than extracting ice under its surface in order to make oxygen by electrolysis. Perseverance landed on the Red Planet on February 18. Its mission: to look for traces of ancient life.