In Nigeria, the Lagos port in the throes of a absolute chaos 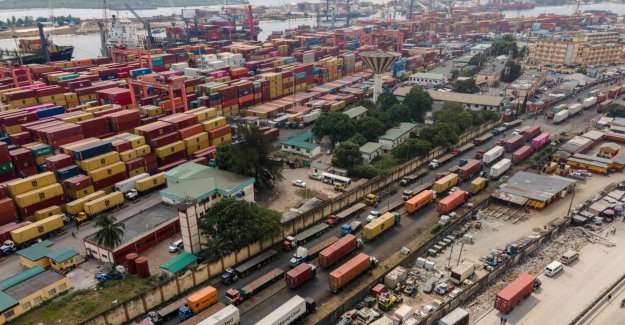 "This is total chaos, "" a disaster ", " a brothel absolute "... The economic actors of the port of Lagos, megalopolis sprawling from Nigeria, were accustomed to operate in difficult conditions. But all agree that the past few months, they had never seen such a situation.

"Some of my ships can take up to 80 days before being able to return to the port," explains the head of operations at a shipping company : "This is unacceptable ! In addition, because the waters off the coast of Nigeria are not secure, they have to wait to Cotonou or Lome. "Whereas before 2020, each terminal could accommodate six or seven container ships per week, the traffic is now cut in half, with only three offloads weekly. "The situation of Lagos leads to the congestion in all the ports of the region, from Abidjan to Pointe-Noire," says the same source.

Read also In Nigeria, the challenges of integration for refugees in cameroon

Lagos, the economic capital gigantic 20 million inhabitants, is almost the only point of entry and exit of all goods that are in transit to Nigeria, a country of 200 million people. In early 2020, just before the crisis of the coronavirus, 99 % of the country's exports and more than 89 % of its imports were transiting through the seas, almost exclusively via Lagos. After the oil, the port of Lagos is the second largest source of revenue for the african giant. And yet, Nigeria loses about $ 55 million per day (€46 million) because of the congestion of its ports, according to the research firm specializing Dynanmar, and even snatch the first place container ports in West Africa in Togo, a country of 8 million inhabitants.

With an increase in demographic pressure, "the imports are increasing every year," says Pascale Jarrouj, commercial director for GMT Nigeria Limited, a major logistics company based in Lagos : "But in the last year, because of the confinement and October protests [against the police violence], they have fallen by about 40 %. And today, it still creates more congestion. "The economic and social crisis in which it is pressed in Nigeria since the beginning of the pandemic, has led to increased structural problems for a long time : a crucial lack of infrastructure and public investment, disastrous state of the roads and endemic corruption at all levels of the chain.

unloading operations are slowed down by the lack of automation of the process, by the excavations "manual" officers of the customs, and especially the limited free space available to tranship containers. In addition to the twenty dams of police, customs officers, agencies, or of special brigades that have to cross the trucks of goods into and out of the port – and almost as much, each time, of bribes to be paid. "Before, we could make out a truck for 400 000 naira [877 euros]," says one of the countless " agents of logistics ", which allow to navigate through the maze infernal devices and within their administration véreuse : "Now, it is in the 1.3 million... In December, we climbed to 1.7 million ! "In thirty years of career, he had never seen it.

With about 2,000 trucks that come in and out each day of the port, the money of the corruption reaches dizzying heights. All these costs are passed directly on to the price of the products to the consumers, in a context of economic strangulation post-containment, explosion, unemployment and double-digit inflation. "There is no tariff logistics fixed, it all depends on the chaos in the port," said a private carrier who works at the port of Lagos since seventeen-year-old : "And above all, it all depends on what some are capable of paying or not. "

Aliko Dangote, the largest nigerian businessman, was said to have lost nearly 55 million euros between 2017 and 2018 because of the congestion at the port. Most small economic actors can not cope and the foreign companies are becoming more reluctant to want to conquer a market, yet immense, with the exception of the large oil companies or large multinational companies, which, alone, can absorb these costs are exorbitant.

the End of February, the manager public port (Nigerian Port Authority, NPA), has set up a digital platform compulsory, ETO, on which to register the truck before it can be called directly on a phone application to collect their goods. Like everywhere else in the world, this system allows you to regulate the flow of traffic. But just two weeks after its introduction, the carriers are unanimous : "a disaster ". All trucks have not yet obtained the documents to register on the application. They have already exchanged against bribes and this causes even more delays in unloading. "The problem is that too many people are taking advantage of this absolute chaos," says a carrier, wry, " well, They have no interest in what things would get better. "