A study shows that at 30 km/h we pollute more than at 50 km/h: Xavier Bertrand's misinterpretation

Xavier Bertrand, president of the Hauts-de-France region, was the guest of France Bleu Gironde on Wednesday, September 22. During this interview, the candidate 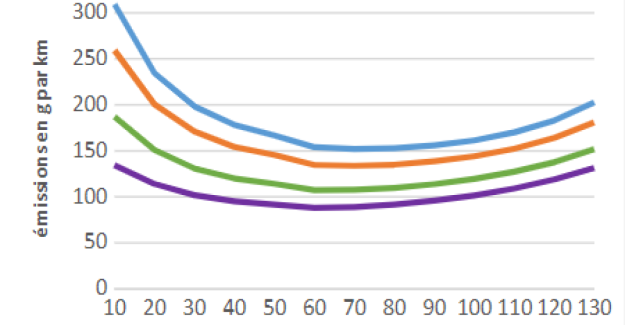 Xavier Bertrand, president of the Hauts-de-France region, was the guest of France Bleu Gironde on Wednesday, September 22. During this interview, the candidate for the presidential election of 2022 was asked about the decision of the mayor of Bordeaux, Pierre Hurmic (Europe Ecology-The Greens, EELV), to lower the speed limit to 30 km/h on the streets of the commune from January, as has just done the City of Paris. Here is what he said:

"There is a study of an institute, Cerema, which depends on the ministry [of ecological and solidarity transition], which shows that at 30 km/h we pollute more than at 50 km/h. It is not me who indicates it, it is this study. The real point is that there are many elected officials who no longer want the car in the city. "

A study shows that we pollute more at 30km/h than at 50km/h. Some elected officials animated by ideology no longer want the... https://t.co/SWVyANWfNJ

What study is Xavier Bertrand talking about?

The right-wing presidential candidate refers here to a publication of the Center for studies and expertise on risks, the environment, mobility and planning (Cerema), an institution under the supervision of the Ministry of ecological and solidarity transition. Published on 17 August, this report entitled "Road emissions of air pollutants: curves and influencing factors" dates back to April and updates an information note published in 2009. "When assessing infrastructure projects or transport projects, it is interesting to know the factors that have a direct impact on air pollutant emission rates and greenhouse gases," explains Cerema by way of introduction.

Vehicle speed is the primary factor influencing the release of air pollutants (fine particulate matter, nitrogen dioxide, greenhouse gases, etc.). It is on this point that the publication cited by Xavier Bertrand therefore lingers. It presents the curves of pollutant emissions, as a function of speed, for three types of vehicles: heavy-duty vehicles, light commercial vehicles (vans) and light-duty vehicles. Among the lessons learned, Cerema notes that for a particular vehicle, the emissions of pollutants are "minimal" at 70 km/h. And adds:

"It should be noted that for light vehicles as well as for heavy vehicles, emissions are significant at very low speeds (up to about 30 km/h), which means that traffic congestion situations are very penalizing from the point of view of air quality. "

Graphic from the report "Road emissions of air pollutants: curves and influencing factors" written by Cerema in April 2021. CEREMA

This report, published a few days before the limitation to 30 km/h in Paris on August 30, was taken up by many media to explain that this measure would generate more pollution than traffic at 50 km/h. However, as the website Stop on Images had already noted, the report does not quite say that.

Why is this report being misinterpreted?

Cerema itself, in an explanatory note, warns against misinterpretations of its report. It states that these figures do not allow "to conclude that speeds limited to 30 km/h are necessarily more negative in terms of emissions than speeds at 50 km/h" and that the conclusions of the report do not allow "to evaluate public mobility policies such as speed reduction measures in urban areas (e.g. zone 30). "

For this purpose, the study center revisits its methodology. It specifies that this is a comparison based on average speeds including different driving cycles on routes in cities but also in "interurban" (national roads, for example) and on highways:

To reduce pollution, the challenge is to streamline traffic

Another clarification: the first factor that affects pollutant emissions is not speed, but acceleration. Congested traffic, multiplying acceleration phases, is "much more emissive than regular and calm traffic", emphasizes Cerema, which believes that, to reduce pollution, the challenge is to streamline traffic and that "better channeling transit to certain axes during the reorganization of traffic plans for the establishment of 30 zones contributes in particular".

The effects of switching to 30 km/h on pollution are certainly questionable. Nevertheless, such a measure has the initial purpose of improving the safety of pedestrians and cyclists, as well as reducing noise, as explained on Twitter David Belliard, EELV deputy at the Paris city hall in charge of transport.

Municipalities that have adopted this limitation actually hope to discourage people from taking their cars, and make them prefer public transportation or cycling. It is thus these mobility changes, induced by the measure, that will have significant effects on the reduction of pollution in cities.

Read also Limit the speed to 30 km/h in the city, a measure with modest effects