Thousands of people from all over the world cross the most global point of Barcelona every day, ignoring, as the people of Barcelona themselves are unaware, that the square still has wounds from a war – the civil one – that was waged with global overtones. 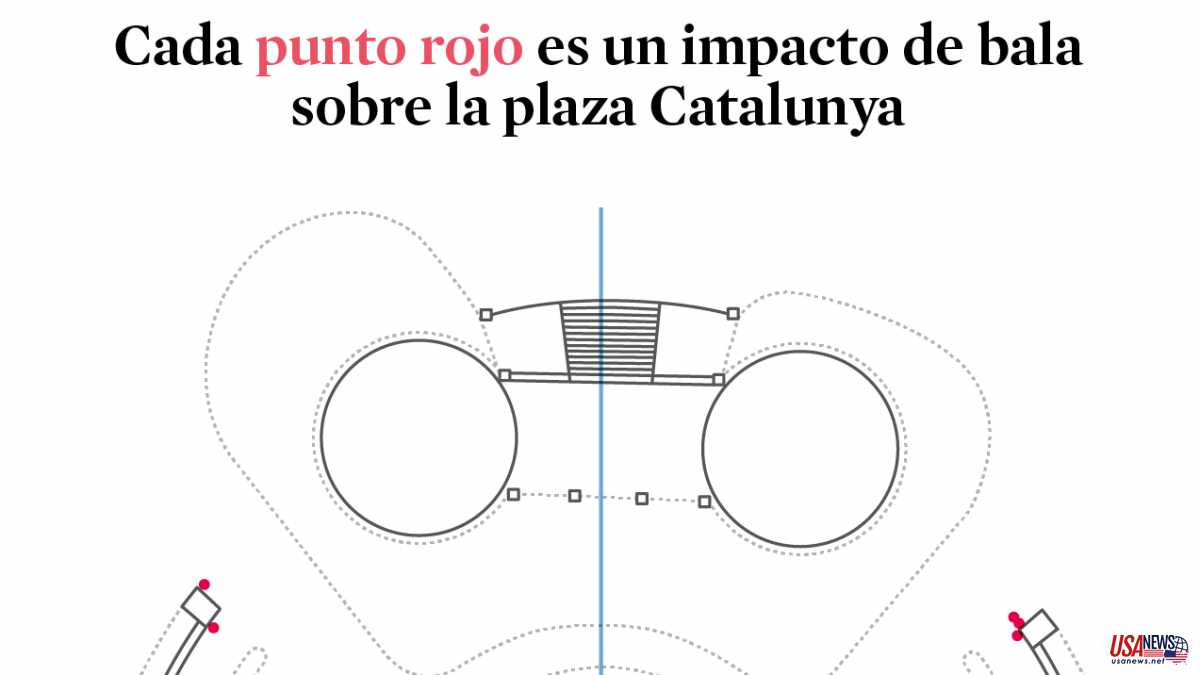 Thousands of people from all over the world cross the most global point of Barcelona every day, ignoring, as the people of Barcelona themselves are unaware, that the square still has wounds from a war – the civil one – that was waged with global overtones

First autopsy in the heart of Barcelona.

No one had counted the bullet wounds that still remain from the two battles that were fought in Plaza Catalunya during the Spanish War, the prelude to the World War.

The battle of July 19, 1936 between the forces loyal to the Republic and the coup forces. And that of May 1937 with the republican government forces and Stalinist groups against anarchists and Trotskyists.

Two battles fought in the most splendid sculpture forest of the nineteenth century: 28 works by 17 artists - among them Clarà, Gargallo or Llimona - sculpted between 1927 and 1929 to beautify the International Exhibition.

Two battles fought between two virgins. The two virgins who, in the heart of Barcelona, ​​survived the iconoclasm of the revolution by forming part of the sculpture itself: the Virgin of Montserrat holding an anchorite and the Virgin of unknown dedication holding one of the sculpted women (during the war, with all the churches set on fire or closed, there were believers who approached this Moreneta to pray in silence).

Someone had to count the bullet wounds, and with Ricard Martínez –the photographer who best works on image and memory in this country– we do an urban archeology exercise. Under the relentless bombardment of the sun – “Could it also be the fascist sun?” asked the reporter sent by La Vanguardia to the Aragón front in August 1936 – we counted more than a hundred shots. But we need experts in ballistics, we doubt many impacts, and we ask the Mossos d'Esquadra for help.

Thus, one morning we met in the square with Sergeant Xavier Garrido, head of the Mossos ballistics unit; Deputy Inspector Joan Soler, former head of the same unit, now retired; and Miquel Ruiz, corporal in the communication area and a graduate in contemporary history.

We are showing you the trace of the bullets that crossed this square a century ago. They are observing, and feeling, the impacts. Its morphology, its dilation, how the stone was broken. Miquel, an expert in ancient weapons, nimbly perches on a statue to inspect suspicious bullets. “A bullet has to be well designed”, emphasizes Joan.

They see some impacts very clearly, others discard them and, in some cases, doubt. Without the doubtful ones, we count eighty-eight impacts of the war that are still there, fixed among the tsunami of tourists. This number is only a first approximation.

Some impacts are easier to distinguish than others. The most obvious and showy are in the pillars of columns on the sea side of the square.

There are impacts that look like bullets and are not, and vice versa. There are impacts on stone and bronze, such as the shot to the chest of Woman with an Angel or under the letter M in Enric Monjo's signature on the Pomona sculpture.

"I'm surprised," says Joan, seeing so many traces of the bullet. "And in such a central point of the city... it takes you to war," adds Xavier.

In the battle of July 19, the rebels entrenched themselves on the mountain and Besòs side of the square – the Colón hotel (today Apple) and the military casino (today El Corte Inglés) – and the Republicans advanced from the sea and Llobregat side . Ricard, who knows this story photograph by photograph, tells how two republican columns surprised the rebels arriving at the square, perhaps for the first time in history, walking through the tunnels of the Gran Metro.

In the battle from May 3 to 7, 1937 –Fets de Maig–, the anarchist militiamen were expelled from Telefónica and fought in vain to recover the building.

We cannot know with certainty which impacts are from 1936 or 1937, with the exception of the group under the Wisdom sculpture: anarchists most likely barricaded themselves there, protecting themselves from the government soldiers who were shooting from Telefónica. It is staged for us by the three Mossos taking refuge in the place of the libertarians.

There are impacts in sculptures with an art deco point –The Popular Spirit, by Otero–, in images with a Soviet touch –Work, by Oslé– or in figures with a certain avant-garde air –Pastor del Águila, by Gargallo–.

Curiously, or not, the point where the largest set of impacts (eleven) survives is the Wisdom sculpture, with the horse crushing the serpent of ignorance.

Each impact is an unmarked tragedy. A person pointing and shooting at another person. In the heart of Barcelona, ​​between Empordà fishermen and Roman goddesses, between virgins and naked women, we killed each other.

In Ricard's rephotography that illustrates the infographic in this article –structured on a photograph by Agustí Centelles–, the impact of the bullets that killed this assault guard on July 19, 1936 are still there, somewhat covered today by vegetation.

Bites of wars that have no end. Near the bullet hole in the Lleida sculpture, someone has spray-painted the Russian symbol for the invasion of Ukraine: Z.

But that's another autopsy.